With the right team, even navigation through uncharted waters can be successful

Long before today’s drone craze, a bunch of geeks from North Finland understood the potential of using drones for purposes other than hobby applications and experimented with various UAV configurations to learn their suitability to industrial applications. Now, they are world experts in drone technology and their innovations are part of a vital supply chain that satisfies the world’s thirst for rare minerals - vital elements in building batteries of electric vehicles, for example. Radai provides geophysical measurement services using Unmanned Aerial Vehicles for mineral exploration.

Being among the first enterprises that used drones in unconventional ways, Radai’s path hasn’t always been smooth. The early phase of product development can be depicted as navigation through uncharted territory. Thus, the company’s first years were characterized by failures and hardships, but they instilled a corporate culture of resilience and did not kill the innovative spirit. Fuelled by their passion for flying machines and creative mindset, Radai’s people created a technology so original that it was acknowledged by EC Innovation Radar as a breakthrough innovation with major market potential. EC Innovation Radar expert’s intuition was right: two years after receiving the prize, Radai’s technology proved highly effective. It played a significant role in revealing the new promising prospect near Pahtavaara mine and helped Latitude 66 in getting a comprehensive image of the structural geology of cobalt deposits in the Kuusamo Schist Belt - which hosts Europe’s fourth-largest cobalt deposit. 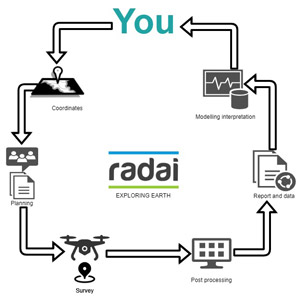 The company has a fleet of drones that are tailored according to the specific magnetic survey needs. Radai’s UAVs, equipped with in-house build sensors, fly over a designed area following terrain topography for better accuracy and measure the total magnetic intensity and vector magnetic field. Because several drones can fly simultaneously, the process is fast and, in suitable weather, several hundreds of line kilometers can be flown in a single day. Collected data is transmitted to a server and later on, is processed and analyzed using in-house developed technologies. The results are presented as maps of the magnetic field. Besides that, Radai’s solution offers derivative results such as downward continuation, reduction to the pole, first and second vertical derivative, horizontal, tilt, and total gradient. These derivative maps are highly useful in geological and structural mapping.

Radai’s service is simple and convenient for the customer. If someone needs a mineral or environmental survey, he/she contacts Radai, provides details about what type of data is needed, and gives the coordinates of the survey area. Based on the estimated number of flight line km needed for the survey, the client receives a quote and an estimate of the duration of the survey. 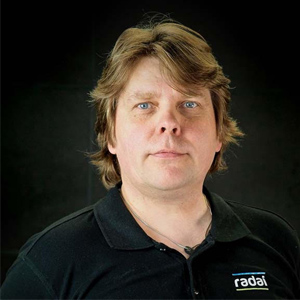 Markku Pirttijärvi, Chief Geophysicist,Radai
After that stage, Radai is in charge of everything related to the survey’s execution: licenses, safety measures, environmental permits, survey planning, etc. At the end of the project, the customer gets geophysical measurement data and a detailed report. The customer has exclusive rights over data acquired during the survey. 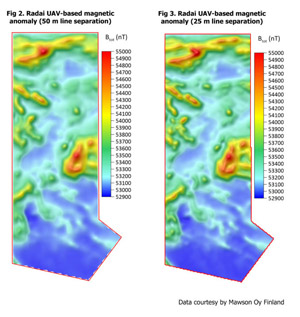 So far, Radai’s services have been used for mineral exploration, but the technology is well suited for various types of applications, such as environmental measurements and monitoring, electric grids and construction site monitoring, mine detection.

Being a high-tech startup in one of the fastest-growing technology ecosystems in Finland, where academic research goes hand in hand with applied research, Radai is fuelled by an inquisitive and innovative spirit. The company is continuously improving its existing service offering but also pursues new products by developing novel technologies. The company stays connected with the latest trends in science and technology by having close links with academic institutions and partner companies across Europe. Over the years, Radai has taken part in several European Union-funded projects. Among them is the Horizon 2020 project NEXT - which aims to develop novel sensitive exploration technologies with a reduced environmental impact.

One of Radai’s contributions to the project is a UAV-based novel electromagnetic (EM) measuring system. It can be used in two configurations. First, one drone carries a 3-component receiver and a large ground loop is used as a transmitter. Second, a two-drone system, where the receiver is carried by one drone and a small transmitter is carried by a second drone and both drones fly over the survey area in tandem or side-by-side with more-or-less fixed loop separation. The novelty of Radai’s system is that, unlike in most existing EM measurement systems, there is no phase-link cable between the transmitter and receiver and the drones are free to change the relative orientation, position, and distance between each other measurements. Full 3D EM inversion of conductivity mesh or the inversion of the parameters (layer conductivity and thickness) of 1D conductive layered earth model is used to solve conductivity/resistivity below the flight path. Data interpretation is made possible by accurate timing of the signals and measurement of the position (GPS), altitude, and orientation of both drones.

The solution developed by Radai is versatile and has applications beyond mineral exploration. For example, the two-drone system can be designed for environmental monitoring and water leakage detection, while the ground loop system is more suited for mineral exploration. Radai’s new electromagnetic measuring system is now at the final stage of testing and soon becomes a useful tool for geophysical and environmental surveys.

Radai is one of the few companies with flexibility and innovation at its core. Its main strength resides in the fact that its employees are world-class specialists who are highly passionate about their work. With these people onboard, Radai is not afraid of the future: even uncharted waters can be successfully navigated when you have the right team. 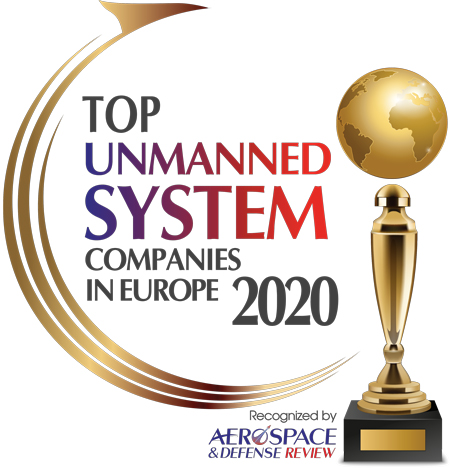